2021 has seen significant progress in the uptake of e-mobility and EV infrastructure within Dundee City Council and throughout the city. This can be seen through the successful implementation of city-wide projects, hosting global events and award-winning achievements.

The year began with the introduction of two fully electric HGVs, marking the beginning of a long-term plan to convert all Dundee City Council fleet vehicles to full electric by 2035.

The environmental impact of these vehicles is clear, with 20,000kg of carbon dioxide being saved per vehicle. Once all 36 lorries in the fleet are electric, this will equate to 720,000kg of CO2 saved from being released into the atmosphere.

Fast forward to June, an additional 4 electric HGV's were introduced into the fleet. School children were involved in the naming of the vehicle which includes Leonardo Di Charge-io, Bin Diesel, Dr Watts, Victoria Volt, Sherlock Holmes and Albert Amp. 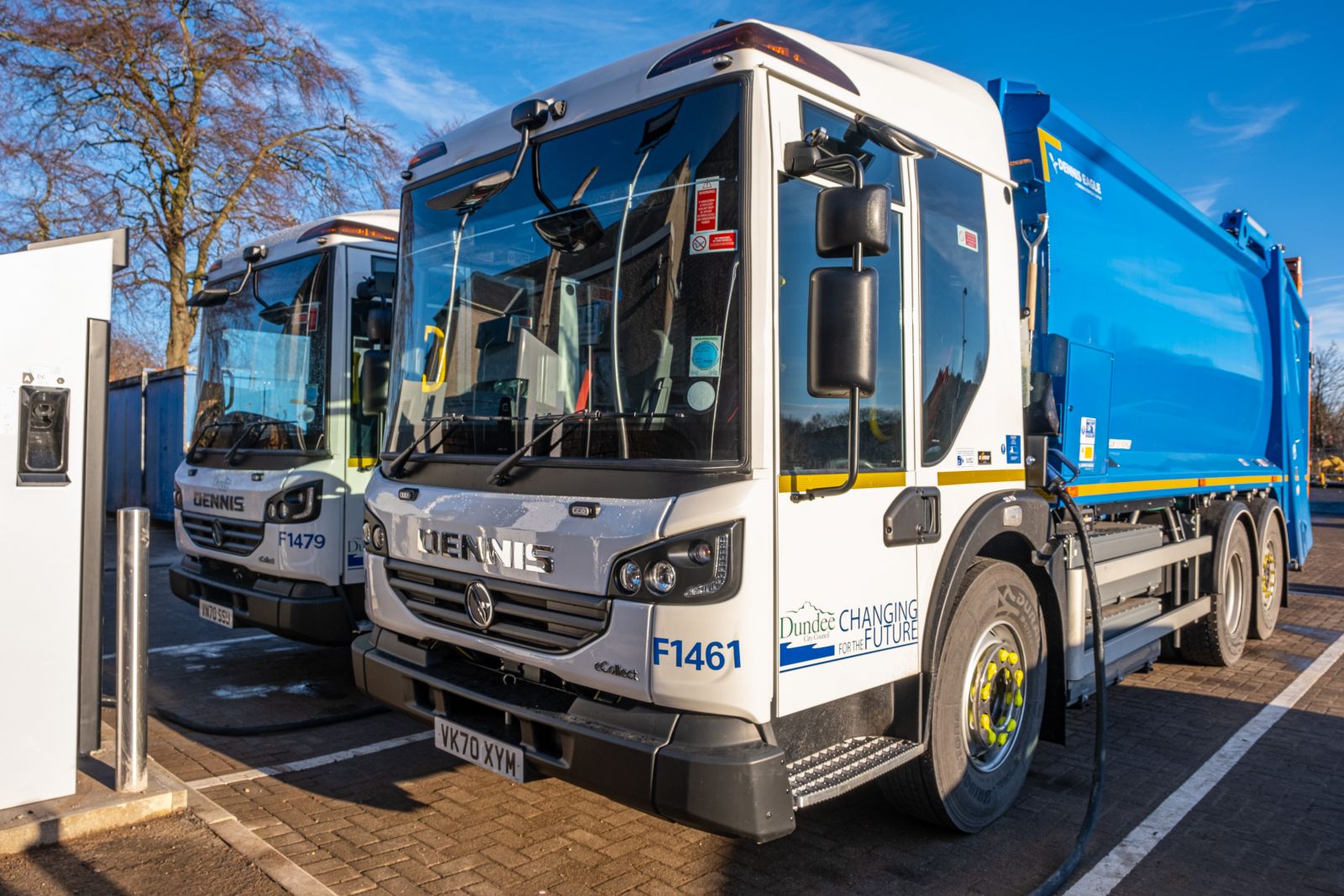 Also, in January, the Olympia multi-storey charging hub was opened to the public. This project was funded as part of the Low Carbon Travel and Transport Challenge Fund from Transport Scotland.

The charging hub is located at the top level of the Olympia multi-storey car park and has 20 bays and 10x 7kw chargers, all powered by solar array. Alongside this, it also boasts an innovative battery storage system and benefits from dynamic load management.

In May, the first of Dundee's pop-up EV charge points were installed at the V&A Museum as part of the Innovate UK Clean Streets Project and in partnership with Plymouth City Council. This project is the culmination of three years of research, development, manufacturing and trialling.

These chargers directly combat frequent complaints attached to charge points including street clutter and potential vandalism. There are pop-up chargers are now located throughout Dundee. 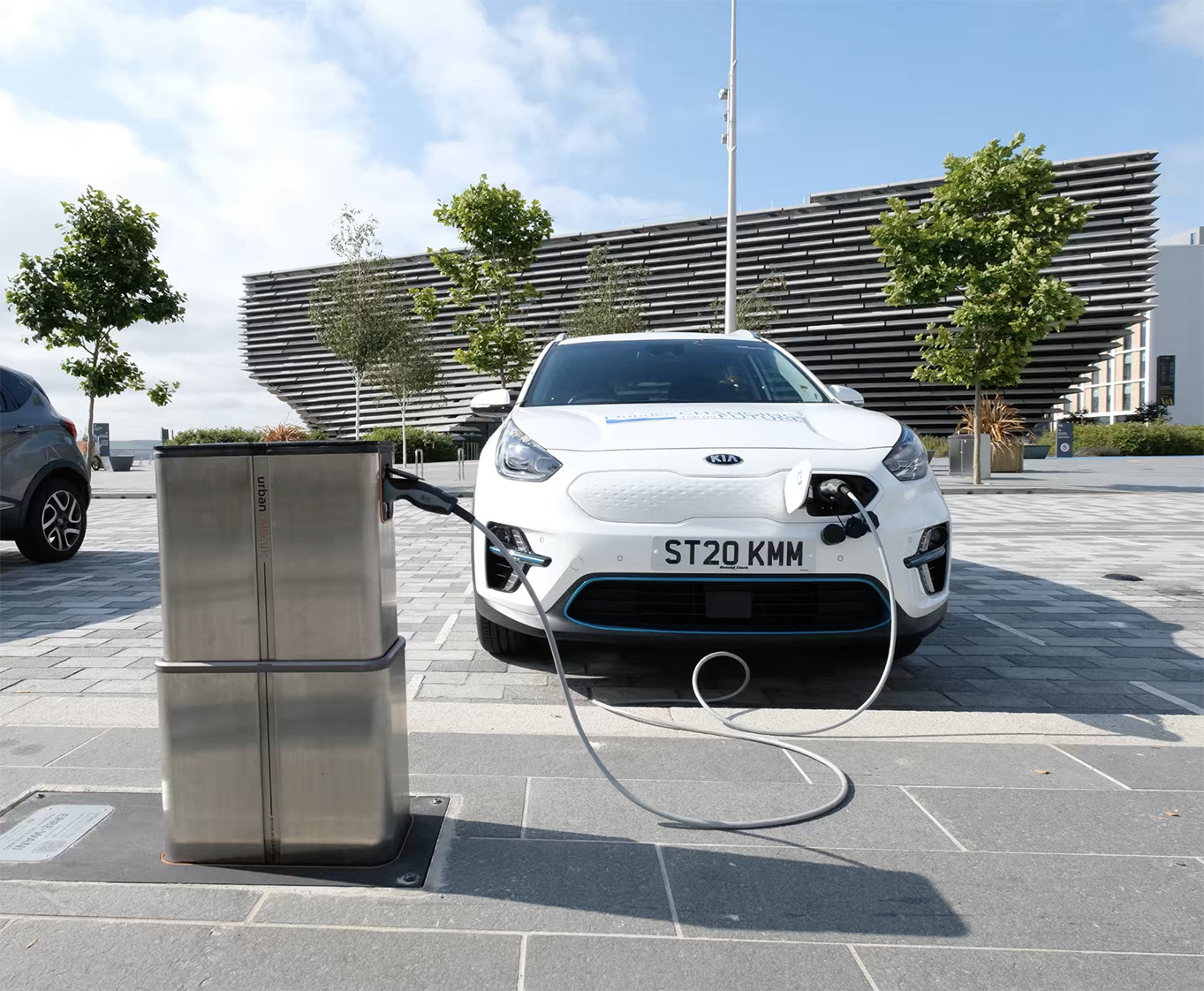 At the start of September, our team had the opportunity to attend the Fully Charged OUTSIDE event which took place over three days at Farnborough International. As the only local council to be invited down, we proudly showcased all the exciting projects going on in Dundee and our EV journey so far. 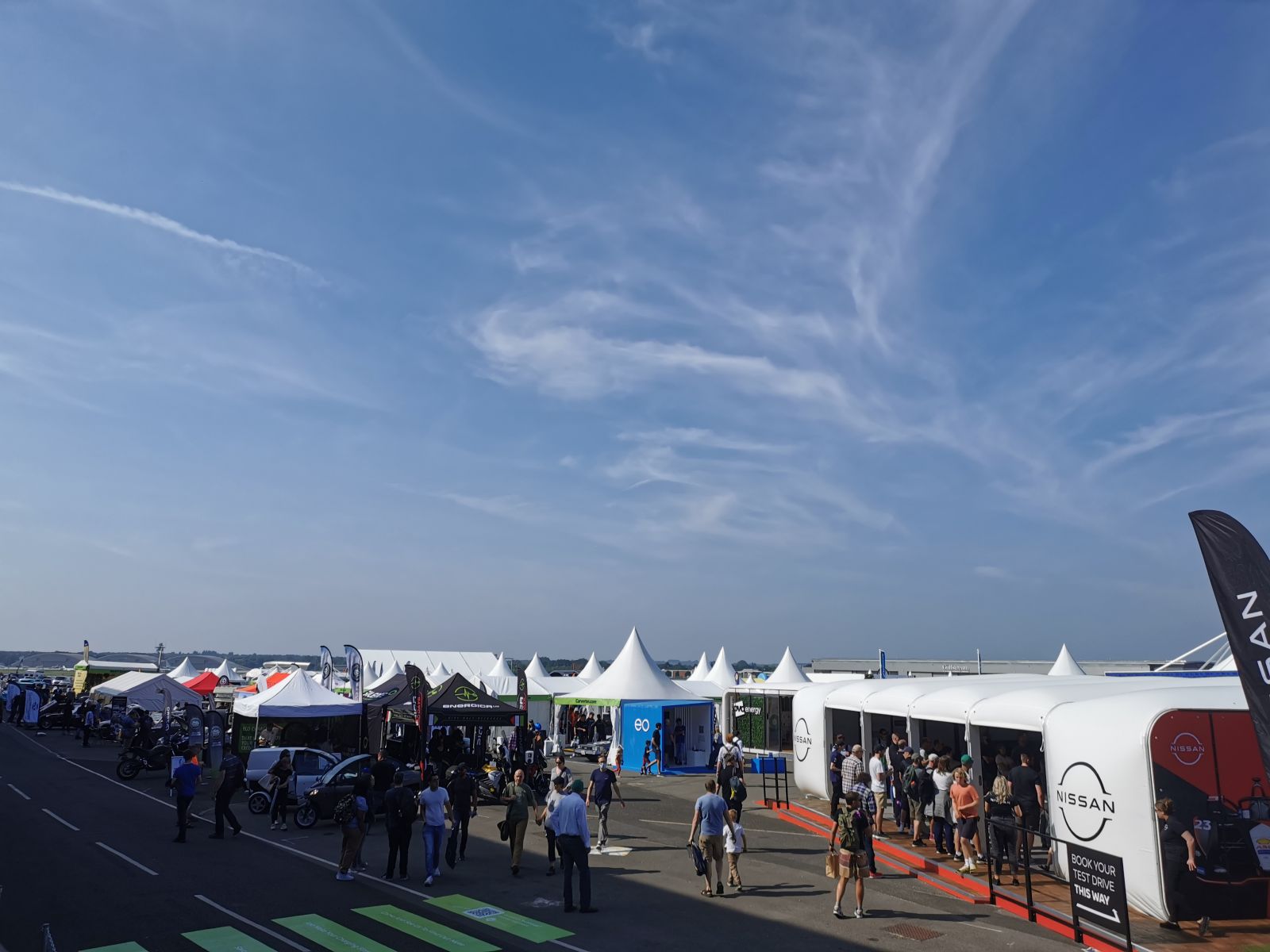 In conjunction with COP26, held in Glasgow from the 31st October - 12th November, Dundee City Council held a host of events, including an international EV conference in collboration with the IEA that attracted delegates and speakers from around the world.

As part of the six-week 'Dundee Celebrates COP26' Events Programme, Drive Dundee Electric took part in the opening event 'HubFest' on 26th September. This event took place at Slessor Gardens and Waterfront Place and played host to stalls, a mobile bike track, Segway sessions, upcycling and many other activities.

Drive Dundee Electric has their own stand, acting as a point of EV information for the public and provided children's activities in the hopes of introducing them to the world of EVs in Dundee and beyond.

In November, Dundee City Council hosted the 2021 Electric Vehicles Initiative (EVI) Pilot City Forum in partnership with the International Energy Agency. The theme of the event focused on 'The road to scaling up: from pilot-scale to commercial adoption'. Over two days, global delegates were given a tour around Dundee City's latest EV developments in infrastructure and vehicle expansion and invited to the Apex City Quay Hotel to attend a series of speaker sessions.

In total, 50 delegates attended in-person including representatives from Ghana, The Gambia, France and Estonia. Additionally, over 70 delegates tuned in from around the world. Topics included exploring the Electric Vehicle Initiative in depth, the impact of low carbon technologies on Scotland's networks, Dundee City's EV journey so far, Ghana's energy future, zero emissions trucks and buses, local transitions and the WBCSD's pathway to decarbonised transport.

The central take away of the event was the need for further collaboration; namely creating links internationally, sharing lessons learned and discussing project developments from the local, national and global level. 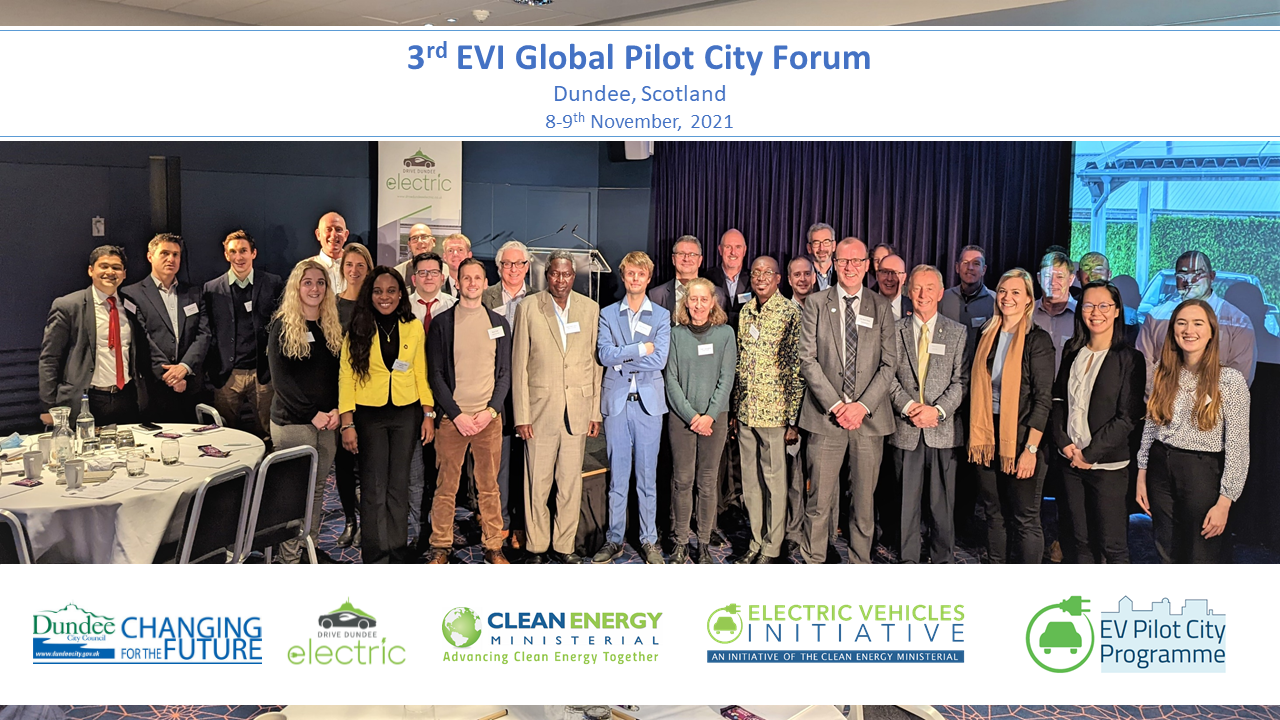 This was a highly beneficial event, allowing the council the opportunity to network with key stakeholder and introducing representatives to the latest clean energy alternatives. The innovation on show and entrepreneurial drive supported by MSIP showcased  both the work of established businesses and inventive start-ups . 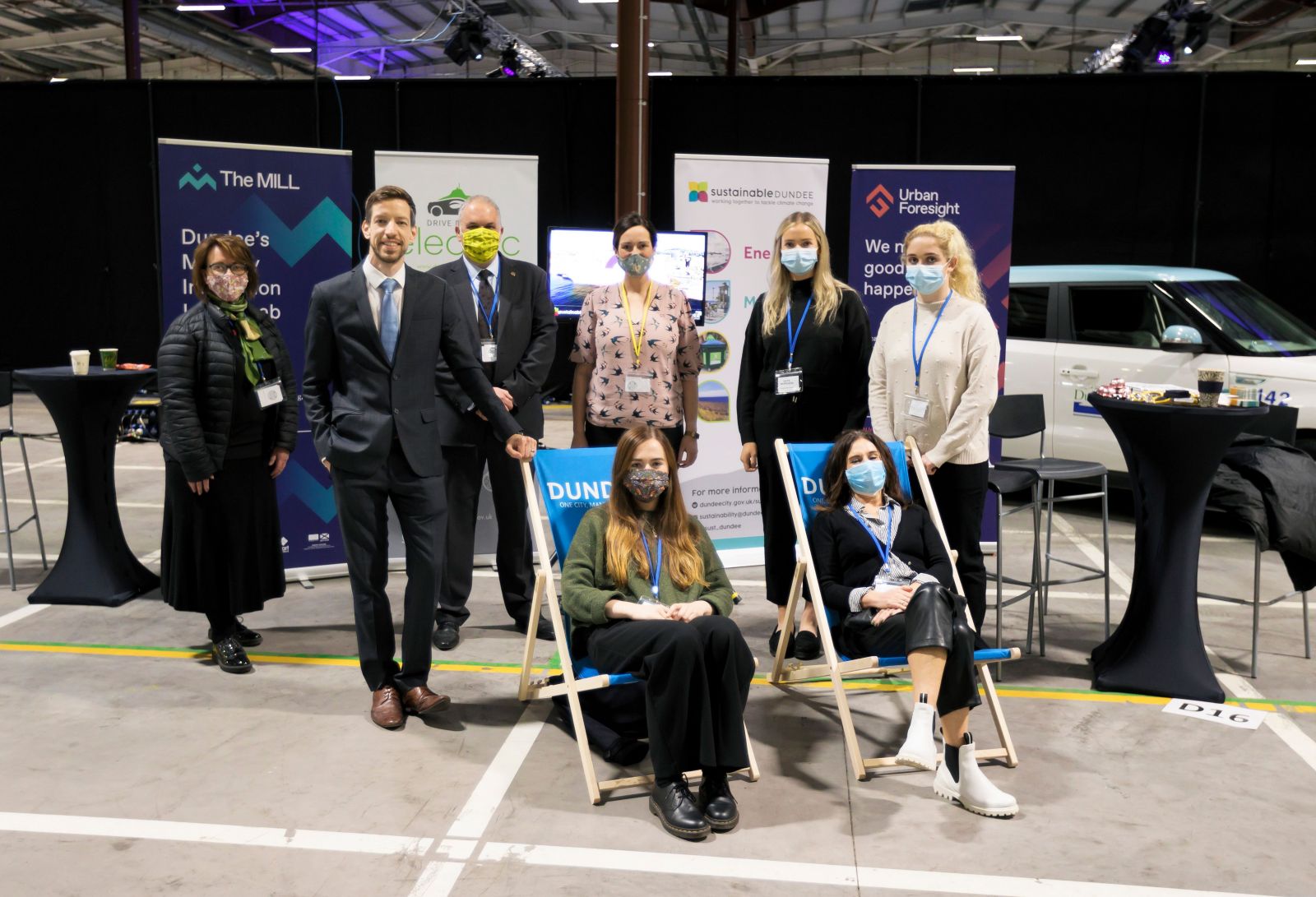 Dundee City Council has ended the year with a huge achievement at the annual GreenFleet Awards, held at the British Motor Museum in Warwick.

Our Corporate Fleet Manager, Fraser Crichton, won the 2021 award for Public Sector Fleet Manager of the Year. This award recognises an individual working within the UK public sector and has demonstrated innovation, dedication and a commitment to making carbon reduction a priority.

2022 is fast approaching and we are eagerly looking towards the new year and the projects, plans and events we have in store. See you all in 2022!

“Electric taxis always surprise our customers with how quiet they are. The switch from fuel to electricity has saved us thousands – and it’s clean too!”

Dundee City Council have 175 electric vehicles (and counting) in their fleet, the biggest of any UK local authority.

“The excellent charging infrastructure in Dundee makes running an electric car very easy. I often plug in to one of the chargers in town, pop to the shops and my Nissan Leaf is fully charged by the time I’m done. I can’t wait to use the charging hubs that are planned across the city. The ability to park for free in the Dundee City Council car parks because my car has zero emissions is an added bonus.”

“We are now using an electric car since 2012 and will not go back to a petrol car. The drive is smooth, responsive and quiet. With Dundee getting better and better with chargers on several places, free parking in Council car parks what’s not to like. The car has saved us money compared to the ford Ka we had before, with currently over 90.000 Miles you can’t tell us it’s not used. Looking forward to the new charging hubs in Dundee.”

“EVs are over 60% cheaper to refuel than modern petrol and diesel cars and have only 1% of the moving components, so they’re really reliable. There are EVs that have clocked up over 174,000 miles in three years and only needed a ball bearing replaced.  Switching to an EV from a 70mpg hybrid and charging it at home has saved me £500 per year on fuel and maintenance alone – double that if I only use Dundee’s free public charge points!”

“Our two electric vans have completely transformed our business. Not only have they helped reduced our running costs, but they are much better for the environment and work well with the stop start style of driving that we do on our free pick-up and delivery service. The move over to electric vehicles has been extremely easy due to the excellent facilities for charging in the local Dundee area. We are even considering adding a third electric vehicle to our fleet.”